Are you addicted to your smartphone? Do you check your phablet in the middle of the night? Do you post to social media as you stroll along the pavement?

If you do the latter, you would be called a ‘smombie’ in Germany. It’s a portmanteau word which combines ‘smartphone’ and ‘zombie’, and refers to the familiar sight of someone pottering along, eyes glued to the phone in their hand, oblivious to the world around them. The term was chosen as Youth Word of the Year in Germany in 2015.

Indeed, just as mobile phones have changed the way we communicate, they’ve also enriched the stock of slang that describes human behaviour.

Another such term is ‘phubbing’. Again, it’s a combination of two individual words, this time ‘phone’ and ‘snubbing’. Picture the scene: you’re out at a cafe with a friend, but instead of listening to your scintillating conversation, he’s engrossed in his mobile phone. We’ve all been there.

Then there’s a phrase which comes from Chinese: the ‘bowed head tribe’. This describes not a mere, singular smombie, but the legions of people we see stooped over mobile phones.

And over in Japan, one blogger describes the groups of people dangerously traversing busy intersections as ‘dumbwalkers’, but who somehow manage to avoid crashing into each other.

While many of these terms are light-hearted, there’s a serious side. In the German city of Augsburg one phone user was killed after being hit by a tram as she crossed the road. It prompted authorities to install ground-level traffic lights for those looking down at their phones.

And the risks with phones don’t end there. The desire for increasingly daring selfies has led to the deaths of over 120 people since 2014. That’s more than have died from shark attacks.

It may come as no surprise to hear, therefore, that we’re more addicted to our phones than ever before, according to a survey in the UK by Deloitte. Phones are our cameras, our calendars and our windows into the constantly updating lives of friends across social media.

Without our phones by our side, surely we’d miss out on all this fun? And yes, you guessed it, there’s a slang term for that mentality too: ‘fomo’, or the ‘fear of missing out’.

2. Why have traffic lights been placed at ground level in Germany?

4.Which word means: ‘photographs you take of yourself’?

5. True or false: ‘Fomo’ is a portmanteau word.

1. What is a ‘smombie’?
A ‘smombie’ is a ‘smartphone zombie’. It’s a slang term from Germany and it refers to people who walk around gazing at their smartphones.

3. What does it mean if you ‘phub’ someone?
It means you ignore someone because you are using your mobile phone.

4. Which word means: ‘photographs you take of yourself’?
Selfies.

5. True or false: ‘Fomo’ is a portmanteau word.
False. ‘Fomo’ is an abbreviation of ‘fear of missing out’.

1. He never listens to what I say. He’s just engrossed in his smartphone!

2. She said I had to choose between her and my friends. I chose the latter.

3. Mark wanders around like a zombie all day with his eyes glued to his smartphone.

4. Our CEO doesn’t like to give serious speeches. They’re always light-hearted.

5. After working all night I felt like a zombie in the office today. Should schoolchildren have jobs? 中小學生應做兼職工作嗎？ 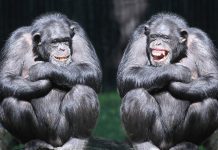