What is your earliest memory? For me, I have a hazy recollection of standing in a leafy garden surrounded by silver birch trees when I was four years old.

I’m around average: some people remember events as far back as two years old, while for others, things seem patchy until seven or eight.

But what is consistent is that no one can remember their own birth or very early infancy. And even after the first memory, most of us only have a sporadic collection of fleeting, flickering mental images until much later in childhood.

The phenomenon is known as ‘childhood amnesia‘, a term coined by the father of psychoanalysis, Sigmund Freud. So, what’s going on here?

And it’s precisely this rapid mental development that causes the problem, according to a study by the University of Toronto in 2014. It found that the high rate of infant brain cell production could increase forgetfulness, because new cells interfere with existing mental circuits.

Another possible explanation is that the part of the brain that stores memories, the hippocampus, is not fully formed until around 18 months. Identity is also important: tests show infants don’t recognise themselves in the mirror until they are around two years old.

Finally, there’s the question of how accurate our early memories are at all. “People can pick up suggestions and begin to visualise them – they become like memories,” psychologist Elizabeth Loftus told the BBC. Are our cherished first memories really just family stories?

1. Why can’t people remember the first years of their lives?

2. What does it mean to be a ‘sponge for new information’?

4. Which word means ‘very green and covered in plants’?

1. Why can’t people remember the first years of their lives?
Three reasons are given. Firstly, in the first years of our lives our brains are growing so fast that new brain cells interfere with existing mental circuits. Secondly, the hippocampus is not fully formed until 18 months old. Thirdly, babies don’t develop a sense of identity until around two years old.

2. What does it mean to be a ‘sponge for new information’?
Being a ‘sponge’ means you acquire a lot of new information very quickly, the same way a sponge fills with water.

4. Which word means ‘very green and covered in plants’?
Leafy.

5. Why might our earliest memories actually be false?
According to Elizabeth Loftus, people pick up suggestions and visualise them – this makes these mental images seem like memories.

1. My memory of the party is a bit hazy.

3. Brian is very forgetful. He can’t remember what he ate for lunch!

4. Wang Li is like a sponge. She learned how to use HTML in a week.

5. People say that if you can visualise success, it makes you more likely to be successful. How honest are you? 你誠實嗎？ 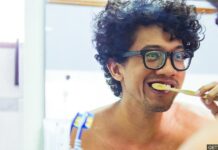 How should you clean your teeth? 怎樣正確地清潔牙齒？